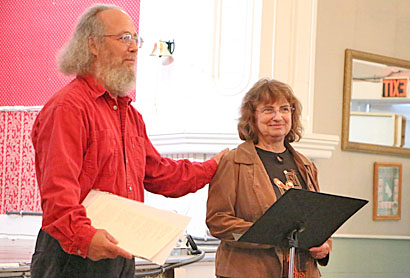 Photo originally published on www.odessafile.com and taken by Charles Haeffner. Michael Czarnecki is on the left, and Charlotte Dickens on right.

Since then, Charlotte has facilitated both events monthly over the last two decades. Scores of writers, both regional and from throughout the U.S., have been featured in the series. This has been quite an achievement. Since the July 2014 celebration, recent readers have been Karen Alpha, poet and fiction writer from Elmira, NY in August, Bart White, poet from Pittsford, NY in September, and most recently on October 27th, Cynthia G. Neale, historical fiction writer, originally a native of Schuyler County, NY, now from Hampstead, New Hampshire. On the fourth Monday of each month, a featured reading followed by an open reading is hosted by the Watkins Glen Writers Group at the Montour House Cafe and Tapas Bar at 401 W. Main Street, Montour Falls, NY.