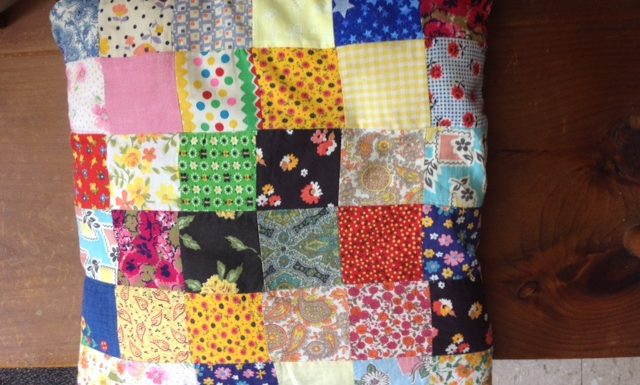 I’m a person trying to figure out meaning in the numerous pieces of my life. I wonder if there is coherence.

Although I am not an avid quilter, I do go to quilt group meetings. I like to trace the whole, see meaning in the whole, rather than get too involved with all the pieces. The same thing with life. Some like me have a preference for the whole. However in preferring to look at the whole, I am aware that any quilt, or other sewing project, depends upon the joining of all the small pieces and all the tiny threads that make the fabric in the first place.

I’ll begin by tracing my little pieces of involvement with fabric. I first tried to draw dresses on women as a very young child. I watched my mother make clothes for us, and household items as well.

We were quite poor—a farm family living on the revenue from the sale of milk from a few cows that were housed on the farm where my grandparents lived, a fifth of a mile down the road.

My mother sewed on a treadle sewing machine, and she let me make clothes for my dolls on her sewing machine. I didn’t get very proficient, but I remember the effort. Then in junior high, the girls got to take home economics. For me, it was a privilege—a happy break from academics. There I could sew, or rather learn how to make first a gathered skirt and then one from a pattern. I still drew women, by then more their faces, and less clothing.

Feeling somewhat deprived in matters of wardrobe, I discovered I could have more clothes if I sewed. So I did. I made a good portion of the clothing I owned in high school, deriving great satisfaction from the effort. I made my graduation dress, and later adapted the white dress into my wedding dress. This was also from necessity since I did not have money for more expensive wedding attire or a large wedding. The wedding, then, was very simple. Barely eighteen, I walked down the aisle of my small town church on the arm of my father in my homemade wedding dress in front of immediate family and the people who stood up with us.

Then I sewed for awhile some outfits for my four children all born before I was twenty-five. That became more difficult as pins on the floor and the chaos from children competed with sewing chaos. Family duties won.

I , slowly, a little at a time, found my sewing efforts diminishing. It was a valiant effort that I made to continue. I went to classes at the Cooperative Extension, and learned how to make a pattern sloper that could be used for designing clothing. I adapted some old clothing renewing them by remaking them, and I made and designed a vest of my own design. Then somehow that stopped. I still did some sewing as my daughter went into high school, but it is the last clothing I remember doing during that time and until recently. However, my mom and I made some log cabin quilts for both my daughter and oldest son as they went to college after that.

But it was as if a portion of me got lost in the quilt of life as I went to work full time in an attorney’s office. I became a writer over time rather than a seamstress. Recently now that I am retired from my career at the Department of Social Services, I made a dress like the pioneers would have worn for my youngest granddaughter. It was the first sewing effort made in years. I loved doing it, and had to get a new sewing machine in the middle of the process so I could finish it.

In 2014, I got my story about my wedding dress published in The Good Old Days Magazine as a nostalgia story. I’ve been playing around with the quilt group on the edges, but saying always how much I am not really into it.

It is because quilting is not where my greatest interest in cloth lies.  Since I love fabric, I will keep up with it. I am perhaps more interested in the quilt of life, rather than quilting per se. I may go back to the dress-making rather than quilts.

However, I’ve found myself back to working on some old quilts I started a long time ago. It is mostly as a nostalgic trip back to viewing old fabrics that I had once loved enough to make into clothing for myself and my children. Scraps of these were made into blocks of a couple of old quilts I started but had not finished. It’s the wanting to have my hands on those old memories that drives me now to want to finish them.

Whatever I do with cloth needs to be thought out more deliberately now. I need to explore what it is I really want in this piece of life. It becomes more important as less years stretch ahead than behind to determine which things matter and which don’t so much. Otherwise, it may make a crazy quilt of life rather than one planned and well-executed.

I find that I am also weaving into my current novel, my first real novel (although I have begun others), threads of sewing and fashion that existed in the time in the early 1800’s.  My female characters have an interest in the fashion of the day and in working with fabric, though they live in humble circumstances.

The trick is to look at it all and pull it together in a novel and in life.