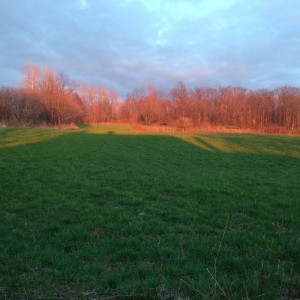 For shadow there must be two things present. First, the light, there must always be sunlight. Then there must be something blocking the light so that it is darkened as it reaches the ground.

In the accompanying illustration the Dickens’ house blocks the light. It is the standing house that blocks the light. This house has stood for at least 150 years and has blocked the light in just the same way as it does today. Little has changed with it since it first stood. The house is nearly the same. The people who occupy it are different. Different families, different backgrounds, but essentially we are the same.

How do I know? Partly I know this from historical research—partly from intuition. We came here for solace, as a place to lick our wounds, a place to start again. In providing this for us, the house also throws shadows. We found enough light to grow, even to thrive sometimes, and other times to live in the shadows.

First to live here and to build this house were the Browns. As far as I can determine, they were the first family to live here although they were not the first owners. It was previously owned. Maybe the land was temporarily lived on prior to the Browns, but the owner left and did not reside here when it was sold to the Richard Manning in 1827 and later ownership was passed to Richard’s sister-in-law Rhoda Brown in 1828. The Browns were a troubled family. They came here to start again, after they lost their lands in the township of Dryden, the last being their farm there in August of 1823. In 1825, I pick up the family’s residence in the Town of Hector from census records. Whether they came directly here or lived somewhere else for a time I have not determined. I have found that the farm was purchased in her name, rather than the name of her husband, Israel, whom I later found reference to in a biographical sketch of their grandson, who lived in Michigan. There it said that the son, Anthony, gave up a legal career to assist the family in farming due to Israel Brown’s becoming insane as a result of what is it their loss of the farm. Here they began again. Israel and Rhoda’s son, Nathan, acquired the farm in 1844 and apparently prospered. He had become the owner of several pieces of additional property in his lifetime. At his death, several people owed money in notes to him.

In between their ownership and my family’s, several people owned the farm, including one of Nathan’s sons for a short time. A family by the name of Mulligan lived here for a time, before the next long-term residents, my family, the Whites. My grandparents had lost their fruit farm on Seneca Lake in default on an FHA loan in the later 1930’s, after weather ruined fruit crops in 1935 from the flood of that year, and a heavy frost in 1937. In the year 1938, they moved here to a hillside farm with a new note from FHA for a less expensive farm.

Here the Frank White family, my grandparents, found their new beginning. My grandfather and grandmother, with help from two of their children, Anna White, and my father, Herbert White, were able to purchase and pay for this place. My father lived on his own farm, a purchased one room school house and a farm bought on quick claim deed from the County, claimed by the county for unpaid taxes. My aunt was deeded the place here by my grandfather. When my grandmother died and my aunt no longer able to live here, my ex-husband and I bought it from her in 1967. My husband and I parted eventually after dairy farming here beginning in 1978 through 1998. We split the farm property and there are again two homes here, as there were for a time in the Brown years of ownership. This house I still live in is the one that they made from the two houses, which both existed sometime after 1850, yet became one at some point before 1874. Light shines upon it and yet there are also many shadows.

I have named my small press publishing company, Light and Shadow Publishing & Illustrating. This year we put out a chapbook of poetry by me called Garden and Sun, a poetry chapbook by my life partner, Paul Dudley Bishop, called Gathering the Sun and several others, but often sun and shadow are important themes in our publications.

I am also writing a novel loosely based on Rhoda and Israel Brown’s lives here. I’m hoping that it will be published, once it is finished, and that the funds from it will help with the restoration and upkeep of this old, Greek Revival farmhouse. My hope is that it continues to have sunlight shine upon it and yet deflect the brightest rays to throw shadows. We need the shadows to show us how to appreciate the sun. Right now, no one much cares about this old home as I do. But as a place of solace and welcome to people who come here, it needs to continue.